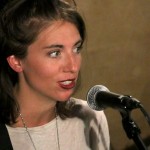 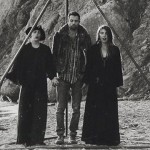 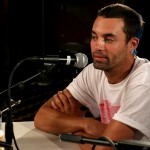 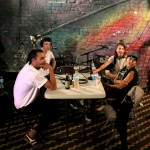 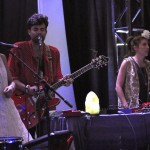 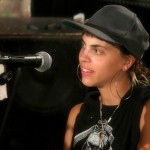 “It’s definitely a concept band but that also lessens the integrity of it. So it’s pretty organic, but I think mainly it’s our attempt at making music that’s outside the structures of aesthetic music like pop music that’s digestible and fun but it’s a product, commercialized and sold. So we’re trying to make something that’s more in the realm of world music where it’s really not concerned about the commercialization of it or the end result, but making music that has a higher effect that’s like elevating, or it’s a journey, or it’s an experience. It has a more of a cause in that regard.”

Trevor, Jaclyn and Allie Blumas oozed character as they walked through the doors of Music City for their interview. The trio of siblings from Toronto make up the band Doomsquad, who recently toured through San Francisco and played The Independent while touring with Fucked Up. The group began by making folk music, though you’d never guess from the music they currently perform. Doomsquad’s current sound is a brand of ambient, psychedelic dance music, a change which has resulted in a distinct shift to the path of their career. Doomsquad’s tours have led them to some very unique concert venues and some equally unique experiences for such a young band. Their sound, though, is not just for the psychedelic listener. Their varied musical background shines through in even their darker tunes, and at their best Doomsquad is able to appeal to the indie-dance and alternative listeners while still maintaining their psych-dance package.

Doomsquad began touring before even releasing any of their music online; as a result, the group has a depth of touring experience that reaches beyond their thus far short musical career. During our interview, the band shared some of their more interesting touring stories including camping out in Dolores Park for two days and sleeping on an RV in front of Mission High School during their first tour. We asked them about performing as a family and they discuss some of their experience writing, recording, and performing. Listen to the full interview to hear what they had to say!